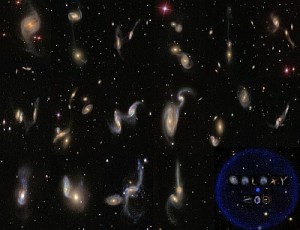 A new machine called “Hogan’s Holometer” presently being built at Fermilab will measure more precisely than any hitherto constructed the odd noise signals detected in previous searches for the gravitational waves (and their concomitant space-time ripples) that are theoretically emitted in the violent collisions between black holes and supernovas.The interesting thing about the noise emissions which precipitated the building of the Holometer is that according to Dr. Hogan, physicist directing its construction, the anomalous signals may indicate “microscopic convulsions of space-time”—i.e., at the quantum or micro-level. This possible quantum effect is not yet empirically proven, and remains theoretical until the new machine provides more data. However, because scientists were previously looking for a larger (macro) effect in the matter-energy continuum of a disturbance from a far-away cataclysmic stellar collapse, to have preliminary data point to its effect upon the sub-atomic particles must beg the question: how does the information (the ‘news’, as it were) of a distant stellar event show up in the subatomic particles if it is not ‘relayed’ through matter in space in a linear fashion? It could only do so if what happened at a distance (the disturbance) took place simultaneously within the tiny particles, meaning that the universe is holographic in nature.

This non-local simultaneity, which is essentially a field encompassing all that is, wherein the larger architecture of the universe(s) is replicated continually in all structures of every size, can also be referred to as “the macro within the micro”),and is in complete accord with theEnochian cosmology elucidated in The Book of Knowledge: The Keys of Enoch®, as well as the extended body of teachings published and taught by The Academy for Future Science. However, the Enochian cosmology shows that this field is not merely an accidental by-product of the physical universe, but is, rather, a consciousness field that we have the innate ability to experience as well as to comprehend. The Keys tell us, essentially, that consciousness precedes matter, and for that reason Dr. Hurtak has said that “the mind is not localized within the body; rather, the body is localized within the mind”, that that mind is, in turn, localized within an even greater Mind not subject to time and space, and further, germane to the concept of a holographic universe where information can be issued to all points out of a zero point origin, “the membrane of mind is instant media for the cosmic circuit.”

Note: For a beautifully written, non-technical portrait of how the “macro within the micro” works within us, we recommend Madeleine L’Engle’s novel A Wind in the Door. Though classified as science-fiction for young adults, it is suitable for all ages as a fine introduction to the concept of the holographic universe.